Lenovo has halved its range of portable workstations.

The Chinese PC giant this week announced the ThinkPad P16. The ones for some ThinkPad P15 and P17 should be removed, The Register has confirmed.

The memory can reach 128 GB and the storage can go up to 8 TB. Lenovo has not detailed other specifications, but it seems that the machine has a single USB-A, USB-C and HDMI port.

Lenovo stated that the machine is “built to combine the best features of the ThinkPad P15 and P17 into a new compact and improved form factor” and offered the following graphic to show this combination. 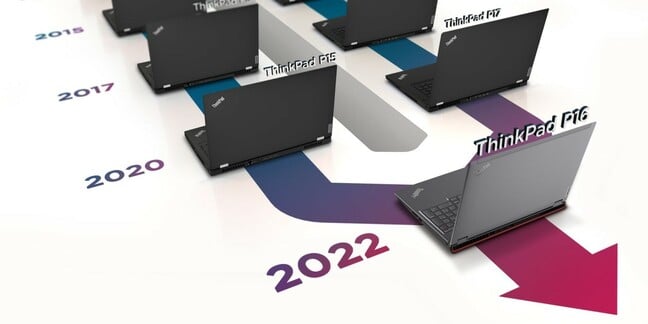 The Register asked if this chart means Lenovo now offers only a portable workstation, and was told that this is the case.

What the graphics don’t reveal is that the P17 includes an Intel Xeon processor and a 17-inch screen; now it doesn’t offer the ThinkPad P16 either. The absence of a Xeon is not unexpected, as Intel’s new HX silicon is its replacement. However, not satisfying the Core i9 HX, means that mobile workstation users cannot get the best-in-class Intel deal. Switching to a 16-inch screen will improve portability for P17 owners, while robbing them of a small screen of real estate. P15 users will need to bring a larger machine.

Speaking of the ThinkPad P15, it did not offer Linux as a pre-installation option and did not reach the scalability of the P16 for memory and storage.

So the P16 looks like a legitimate combination of Lenovo’s two previous mobile workstation offerings.

We look forward to Lenovo’s comment on why it has decided to reduce its range, but one likely reason is that mobile workstations are not a high-volume product, so the company can’t keep two models. We’ll update this story if we receive substantial information from Lenovo ®

UPDATE: May 20 at 8:45 p.m. UTC. This article has been modified to correct errors in the specifications of the laptop.

FTC and DOJ Hear from Public on Effects…

New DNA Technology Is Shaking Up…

Diablo Immortal for iOS review: The…

5 things you may have missed…

How to preorder Pokémon Scarlet and…